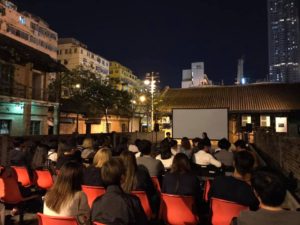 This work explores the notion of disappearance, memory, and ways of seeing. Footage taken in India in January 2019 is juxtaposed with footage and photographs taken in Yue Man Square, Kwun Tong (Hong Kong) at 2019 and ten years ago. The essay film looks into the phenomenon of disappearance as representation through lens-based media in which, we examine the ways to connect; reflect on ingrained thoughts, and revisit emotions. We see ourselves through (and the awareness of) sound and image as representation of actuality, going back and forth between the states of loss and rediscovery. When a river, a busy town centre, or even the boundary of the rule of law could disappear altogether, perhaps, it is the best time to look at our own mind more clearly. 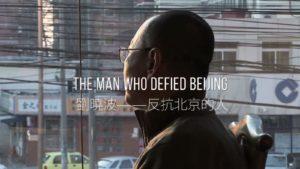 Description:
The passionate story of the 2010 Nobel Peace Prize, Liu Xiaobo, the man who has never ceased to demand a democratic transition in China and who paid the high price: he died in captivity in July 2017.

In the spring of 1989, when students occupied Tian’anmen Square in Beijing, Liu Xiaobo, a Chinese literature scholar and outstanding speaker, became one of the movement’s mentors. Shortly before the massacre began, on the night of June 3-4, he begged the youth to evacuate the place and went on a hunger strike to ask the authorities to avoid violence. Arrested on June 6th, he is sent to a re-education camp. Upon his release, a year and a half later, he chose to remain in China and resist from within, while many of his compatriots opted for exile. Arrested in 2008, for co-signing Charter 08, a program for a democratic transition in China, he was sentenced to eleven years in prison for subverting state power. Still imprisoned in 2010, he cannot personally receive the Nobel Peace Prize awarded to him and dies in captivity seven years later, in July 2017.

Today, the Chinese regime is making every effort to ensure that Liu Xiaobo’s name is forgotten, increasing censorship within its borders and pressures on the rest of the world. But in 2008, the dissident had entrusted his will, political and personal, in the form of a long interview, filmed by François Cauwel. It serves as the frame for the journalist Pierre Haski to make the fascinating portrait of a man who, all his life, fought for his convictions and paid the high price. In particular, he summons his comrades, as well as his widow, the poetess Liu Xia, long placed under house arrest and now exiled in Germany. 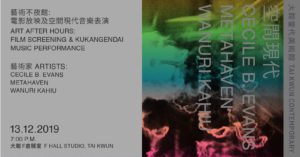 This evening programme brings short films of artists Cecile B. Evans, Metahaven and Wanuri Kahiu, followed by a mesmerising music performance of Japanese experimental post-rock trio Kukangendai. Informed by the curatorial thinking of exhibition Phantom Plane, Cyberpunk in the Year of the Future, the screening probes situations such as material consciousness in the digital realm, the power structure and organisational abilities of the internet during a time of social unrest, as well as a portrayal of an apocalyptic future world lacking in water. It presents a reflection on crisis modes and humanity in the evolving technological reality.

Formed in 2006, Kukangendai ceaselessly explores musical boundaries through a process of editing, replicating and deliberate error. Predicated on collage, mechanical sampling and discordant sounds, the music of Kukangendai combines electronic sounds and creativity together to a dazzling end. Tai Kwun Contemporary is pleased to host the first performance of Kukangendai in Hong Kong.